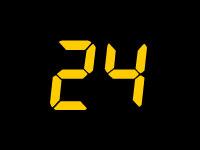 Last Time: Julian, who looks remarkably like the doctor on Star Trek: Deep Space Nine, has joined forces with his brother Habib Marwan. With the help of Chloe, Jack was able to disarm the bomb on Audrey, and free her from the cage filled with snakes and monkeys, much to the relief of the monkeys and snakes. Chloe, Curtis and Jack arrive on a college campus, where the students are recruiting for their campus club activities. Curtis found out he’s a bit of a perimeter making celebrity, Jack discovered that Manilow’s new job as a TV evangelist has gotten him some followers. Oh, and Julian has a weapon pointed at Jack right now!

The follow occurred between 9pm and 10 pm, but we didn’t get it to you in less than thirty minutes, so this one is free.

9:00 pm – Julian points the weapon at Jack, says “Mr. Bauer, you’re about to die. Die! A horrible death! It’s REALLY going to hurt! Not your run-of-the-mill hurt either. No. It’s gonna be like if you had a whole bunch of paper cuts, and they got some salt in them, and they itched, and got infected, and then you couldn’t find a Band-Aid, so you try to use Bactine, but it really stung, and then you slipped on some gravel, the really sharp kind that hurts when you walk on it with bare feet, and the gravel has had hot sauce recently sprinkled all over it, and it got into the paper cuts after you fell! That kind of hurt!”

9:02 pm – A student walks past Jack, stops dead, and drops his backpack. He says, “Oh, no, not you!” Then he sees Julian, and says, “Uncle Julian??” It’s Bahrooz! Jack sees Bahrooz and whispers, “Bahrooz, listen carefully. You have to go to Julian and whack him over the head.” Bahrooz looks at Jack like he’s crazy. Bahrooz completely refuses, saying he’s isn’t carrying his terrorist killing shovel. In fact, he’s not carrying even so much as a gardening trowel. Julian starts to protest, saying he can hear everything they’re saying, and that he’s going to shoot them both unless they shut up.

9:04 pm – Jack squints at the weapon, and takes a step forward. Julian says, “One more step, and I’ll shoot this phaser at you!” Jack says, “Where did you get that weapon?” and takes another step forward. Julian says, “Oh, the heck with the hurting part. I’m just going to kill you!” He tries to fire the weapon, but nothing happens. Bahrooz grabs his bag and runs away. Juliean quickly looks over at the table where he got the phaser. The people at the table, recruiting for the Star Trek club, all wave at Julian. Julian looks and sees that there are other phasers on their table, all marked “Toy Phaser”. He takes his phaser, throws it at Jack, and says “Until we meet again, Jack Bauer!”. Julian runs away, and the guys from the Star Trek table all run up to Jack to ask for his autograph, blocking Jack from following Julian.

9:06 pm – Chloe and Curtis run up to Jack and ask what all the commotion is about. Jack signs a few pieces of paper, autograph books, and a couple of Spock ears as he tells Curtis and Chloe about the Manilow followers, Bahrooz and Julian. He points in the general direction of where the Manilow followers were, and then sees they’re all gone.

9:08 pm – Jack tells Audrey to call CTU and see what they have on “Julian Marwan”, and what the story is with the television studio they were at earlier in the evening. Audrey doesn’t answer, which is fortunate, because if she did, she’d have some sort of magical powers, since she wasn’t with them in the first place. Jack looks at Chloe and Curtis, and asks where Audrey has gone to. Curtis says that they must have left her back at the zoo, because she didn’t come with them to the college. Jack says they have to head back for Audrey, in spite of complaints from Chloe and Curtis.

9:13 pm – Hollywood is on the phone with Marwan. Marwan tells him that he has some good news and some bad news. Hollywood says if the “good news” has anything to do with car insurance, he’s going to shoot Marwan himself. Marwan says that in that case he just has bad news: Jack Bauer escaped Julian. Hollywood asks what he means by “Bauer escaped Julian”. Marwan says that it’s not so much “escaped” as fled…with Julian doing the “fledding”. Hollywood asks if that’s even a word. Marwan ignores that, and tells Hollywood that they have to meet in order to come up with a new plan.

9:15 pm – Jack, Chloe and Curtis arrive at the zoo just as the last of the police cars pulls away. One of the zoo guards is about to lock the gates when the group runs up to him and describes Audrey, and asks whether she’s still in the zoo somewhere. The guard says all the monkey cages are locked and the exhibit is closed. They explain that Audrey is actually a woman, not a monkey, but it still takes a little bit to convince the guard that they’re not lying.

9:17 pm – All of them, including the guard, look in the zoo. They look everywhere. The guard calls everyone over when he finds Audrey, but it turns out it was just an ostrich.

9:19 pm – Marwan arrives at Hollywood’s secret hideout while talking on the cell phone to Julian, and they’re arguing. Marwan tells Julian that he doesn’t care what it costs, he’s not going to do it. He tells Julian to get over to Hollywood’s hideout right away, and hangs up. Hollywood looks at Marwan and tells him that he better do whatever he can to get Jack Bauer, or else. Marwan looks confused for a minute, and then realizes Hollywood’s mistake. Julian wanted him to sign up for the family plan on his cell phone.

9:22 pm – After extensive searching for nearly four solid minutes, everyone decides that Audrey can’t be found anywhere in the zoo. Curtis did find several shell-shocked monkeys, but Chloe attributes that to them being in the same cage as Audrey earlier that night.

9:23 pm – Jack gets on the Jackphone and calls CTU, telling them they need as much information on Julian Marwan as possible. He tells Madam Haig that they’re all coming back to CTU, and to please have a change of clothes ready, because after everything that happened yesterday, and everything that’s already happened today, they really need to change clothes, especially if they expect to sneak up on someone without giving them a warning whiff first.

9:25 pm – As they drive along the expressway, Jack looks up and sees a blimp above the city with a lit sign that says, “Happy Anniversary, Mr. and Mrs. Steve, September 6th, Twenty Wonderful Years”. Jack wonders how they could get that big of a message on one blimp.

9:31 pm – Curtis, Chloe and Jack arrive at CTU, grab the clothes laid out for them and go to change. A minute or so later, they all come back out, take one look at each other, go back in the dressing to exchange clothes, since they’re all wearing each other’s clothes.

9:33 pm – Marwan plots with Hollywood while they wait for Julian to arrive. Marwan says his supply of thugs and lackeys is running low, but Janosz is there watching them, so he doesn’t expect anything to happen. Realizing what he just said, he calls Janosz just to be sure.

9:34 pm – Jack, Chloe and Curtis have finally changed into the right clothes, and go to meet with Madam Haig while men in toxic hazard suits go to the dressing rooms to remove their old clothing.

9:35 pm – Madam Haig is in the conference room, and the room is full of analysts. Up on the screen is a PowerPoint presentation on the screen showing a fifty-six step plan to get Marwan and Julian. Haig is in the middle explaining the possible tactical advantages of using paisley instead of camouflage for CTU combat clothing.

9:37 pm – Julian arrives at Hollywood’s hideout. Hollywood asks if he was followed, and Julian says there was a Star Trek: Voyager series, but as far as he knew that had nothing to do with his previous work.

9:39 pm – Back at CTU, Curtis whispers to Chloe that maybe a “PowerPoint Poisoning” attack like this on Marwan would work. Chloe agrees. Jack looks really impatient, and finally can’t stand it anymore. He stands up and tells Haig that unless they act right away, Marwan and Julian are going to do something really bad. Jack continues, “And speaking of ‘bad’, what the heck was that television studio doing?”

9:41 pm – Haig tells the room that in an effort to make CTU “more accessible”, the Homeland Security Department licensed the rights to things that happen in CTU to a TV program, where they can be shown to the general public. Jack asks her what about the word “Undercover” is it that she doesn’t understand.

9:42 pm – One of the CTU agents, Howard, who has been working downstairs runs into the room. Then he gets up, opens the door, runs through the door, and announces they’ve found out where Marwan and Julian are right now! Jack asks where they are, and after getting detailed instructions, Jack asks Chloe to stay behind at CTU because he’s going to need some high powered computer work here. Curtis and Jack leave. Chloe plugs in her taser to recharge.

9:44 pm – Madam Haig calls Chloe into her office for a full report. Chloe goes upstairs, and instinctively tries to grab her taser, but realizes she left it downstairs.

9:50 pm – Curtis and Jack arrive at a set of abandoned warehouses along a long street. Jack calls Chloe on the JackPhone, but Howard answers. Jack asks him where Chloe is. Howard says that she’s been ordered to Haig’s office, and that he’s supposed to help Jack.

9:51 pm – Jack doesn’t like this, but he presses forward anyway. He asks Howard which warehouse Marwan is supposed to be in. Howard tells him that he’s at the warehouse just outside of where Jack is standing. Jack orders Howard to get CTU tactical agents to their location right away.

9:57 pm – Jack reminds himself to ask Chloe to train Howard on the basic art of map reading. Jack calls to Marwan, “Marwan! Give yourself up!”.

9:58 pm – Marwan is just about to speak when Julian steps forward, and says something. Jack says, “What did you say?” into the megaphone. Julian yells, “Can you hear me now?” and a LOT of people come out from building doors, pillars, and poles. Julian holds up his cell phone and tells Jack that this HIS network.

9:59 pm – Jack tells his group that everything’s going to be OK, because it looks like they’re a bunch of cell phone company employees. Curtis says, “Uh….Jack? I don’t think so!” and points. Jack looks and all the people pull out machine guns. Jack says, “This is worse than I thought! The Marwan Brothers are using the people who do customer service at AOL! They won’t go without a fight!”