Oh my… Ben sure does have some … interesting… things happen on his birthday.

That was nothing like what I expected it to be, the show had a bunch of things that I never saw coming. None of my previous predictions were right (except the ones about Juliet, and the disembodied voice), but that’s OK. I probably would have been disappointed if that were the case because what DID happen was a lot more surprising.

First, I was completely blown away by the fact that Ben helped kill the Dharma Initiative people. The continued shipments of supplies to the island either mean that Ben and “the original inhabitants”, as he put it, have kept up the appearance that it’s still around, or something. What they did, and how they did it, well, that’s another mystery.

Second, I thought for sure that we’d see Jacob tonight. The fact that we only heard him after Ben turned his back was great too… Keep that mystery going. Was that really something named “Jacob” or is this a “Norman Bates” Ben has pulled on everyone?

Whether Jacob is real or not doesn’t explain anything about the obsession with pregnant women on the island.

It sure seemed to me like Richard looked pretty much the same as when Ben first met him. Was that just a fluke, or what?

Say that Jacob is really some sort of ghost….

Could the “original inhabitants” of the island be entities like Jacob, only taking corporeal form? Could Richard be one of these things?

Is Ben doing what he’s doing now to help those things (and maybe Jacob), get off the island?

If Jacob is NOT a ghost, that could only mean that Ben is the one that said the words “Help Me” and is Norman Bates, only shorter. Ben repeatedly asking “What did Jacob say” doesn’t really convince me that we can rule Ben out of what’s happening.

I’m not really sure where that leads things in the series, but there you have it.

As for Locke… Wow… Locke sure has a knack for being completely sure about things, and being very very mistaken in the end. I hope that he doesn’t end up dead in that pit, because it sure would be disappointing to see that character off the show.

Update: Kali.Amanda points out we DID see Jacob. Here’s the picture: 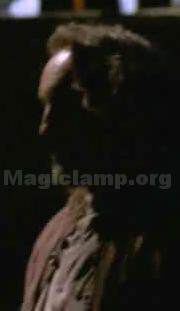 4 thoughts on “Man Behind The Curtain Spoilers”