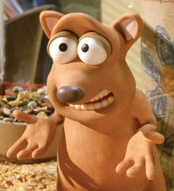 Creature Comforts is being reported as being canceled,  effective immediately, according to The Futon Critic.  I haven’t seen any other confirmation of this except at that one source.  There’s nothing on the Eyeballs and Fishlips Blog (an unofficial production blog for the show) about this yet.

That would be a pretty big disappointment, since they’ve only aired about three shows so far.  Aardman Animations is creates the show, which has been very popular in Britian.

Aardman is responsible for Wallace and Gromit and the movie Chicken Run.