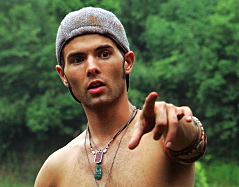 The winner of Survivor: China is Todd Herzog

Before tribal council, I thought that Amanda went in with a good chance to win because Courtney and Todd ticked so many people off.

During tribal council, it came out that it was Amanda’s idea to get rid of James, which I think was a surprise to him. I think James would have liked to have found that out before he had a chance to ask question (he was first, so he didn’t get to ask anything afterwards).

Jaime, Denise and Peih-Gee were especially upset at the final three.

I think it would have been better for them to ask the questions in the order they were voted off.

Anyway, afterwards it looked to me that Todd would probably win. From the way people reacted, Denise addressed Courtney, it sure seemed like Denise would vote for her. I didn’t think Jean-Robert would vote for Todd, and I don’t think James would vote for Amanda.

They revealed a few of the votes beforehand:

They switched to Jeff live:

During the reunion interview Jeff asked Jean-Robert about the vote he made for Todd (!), and Jean-Robert said that his mind was changed because it was the best move to vote him out. The Jeff asked Todd, and Todd admitted that he did play on Jean-Robert’s ego.

Various things that came out during the final interview:

Jeff asked James about “the biggest blunder in the history of this game” asking why he didn’t use the idol, and James said that he made the mistake of trusting his alliance.

Courtney started the game at 93 pounds and ended at 86 pounds.

James said that he’s had a lot of people that came up to him telling him that they liked him on the show. The craziest thing that’s happened afterwards and that after a funeral a couple of ladies were excited that they were able to meet him.

Denise’s return was a lot different. They didn’t rehire her after the show was over, saying that she would be too much of a distraction for the kids. She now has a job as a janitor at the school, but she has to work the night shift. She asked that if anyone had a lunch lady job, she’d like to hear from.

I have to say I think it’s pretty crappy that the people at Denise’s school treated her this way. I think that’s pretty petty.

Jaime and Erik are dating.

Chicken said, “If I didn’t win the money, I wanted to go first”.

The Sprint $100,000 prize went to the most popular survivor: James. The other two most popular people were Peih-Gee and Denise.

And talk about a live show: Mark Burnett, creator of Survivor, after listening what happened to Denise, told Jeff during a commercial break to tell Denise that he’s going to give her $50,000!

The next survivor starts in February: Survivor Micronesia: Fans vs. Favorites They’re taking fans of the show and pitting them against survivors of seasons past. One of those survivors will be someone from this season.

Survivor items will be up for auction at http://www.pedaids.org/.

What did you think? Did the right person win?

4 thoughts on “The Winner of Survivor China is Todd”