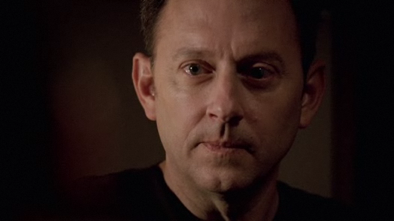 As I’m sure you’ve guessed by now, tonight’s episode of LOST, “Dead is Dead” will center around Ben.

There are so many ways to read how the title of the show relates to Ben, it’s hard to decide what it might mean…but that never stopped me before, so here goes:

1) If we’re going to see how Ben got all bloody, chances are it will be tonight. He was at the marina making that phone call to Jack… Who else is at the marina? Penny and Desmond. Yep, chances are pretty good that Ben killed Penny. This is going to set up the reason why Desmond is headed back to the island, to confront Ben.

Far out thought: I think Charles is likely to bring Penny’s body with him to save her, and it will turn out the skeletons in the island are going to be Penny and Desmond.

2) “Dead is Dead”, huh? Not so much for Locke, now that he’s back on the island. The conversation between Ben and John should be pretty interesting, because it sure looks like “Dead is Dead….but not on this island”.

Maybe Ben and John have more in common than it looks…

What if “Little Ben” died while in Richard Alpert’s custody, and came back the same way John Locke did?

We’ll have to see what happens! Can’t wait!