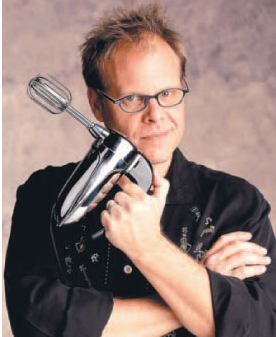 Alton Brown, host of “Good Eats” and “Iron Chef America”, has signed on to Food Network for three more years. He’ll be hosting more episodes of both shows.

I’m glad that’s happening. He’s one of the man reasons I’m cooking a lot more than I used to.

I met Alton at a book signing a couple of years ago, and he couldn’t have been nicer. When we were standing in line waiting for our books to be signed, the wife of one of the guys in front of us asked, “Are you engineers?” We told her we all were engineers. She asked, “What is it about Alton Brown and engineers? All these guys are engineers, and they love Alton!”

Probably just in the way he explains stuff, and keeps it all fun.

The winner of “The Next Iron Chef” is Michael Symon

How did it end? In Kitchen Stadium, of course. What was the secret ingredient? Swordfish. After they finished cooking, “The Chairman” announced that the regular judges wouldn’t be judging; the Iron Chefs would!

All of the judges and the Iron Chefs did a panel afterwards and discussed the candidates. They wrote names on ballets, and Alton brought them back to The Chairman, who announced that Chef Michael Symon was the winner.