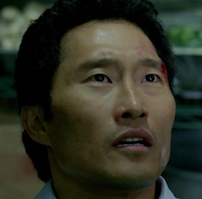 I just finished watching the latest LOST episode, “The Package”. There sure was a lot going on in that episode.