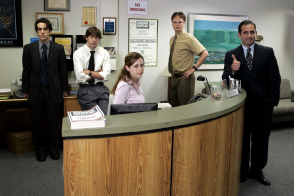 Is there going to be a problem in The Office soon for Jim and Pam?

Lots of confrontations happened last night on the office Angela broke up with Dwight, Kelly manipulated Ryan into thinking she was pregnant to get him to go out to dinner, and Ryan and Michael aren’t quite seeing eye to eye about the future of Dunder Mifflin.

When Dwight killed Angela’s cat last week, the thought occurred to me: What if their fight gets big enough that there’s a sudden corporate edict that said there was no dating allowed at work?

Fast forward to this week: Angela breaks up with Dwight. Ryan is really mad at Kelly. Michael is skating on thinner ice than usual with corporate (in particular Ryan). Ryan tries to get a date with Pam, but can’t because Jim is dating her. (“I guess he can’t get ANY girl” – Nice line, Jim!) Toby didn’t let Jim and Pam sign a note about their dating, because Toby still has hope he can date Pam.

So, what happens is Ryan gets really mad, turns around, fires Michael and takes over? (This happened on the British version of the show). The probably coming conflict between Angela and Dwight will expose their relationship, which was never reported to HR. What if it blows up badly and they get in trouble? What happens to Pam and Jim? There’s nothing at corporate saying they ARE dating (since Toby didn’t let them fill out a form), are they going to get into trouble because of it?

…yeah, I know… this is beginning to sound like one of my Lost theories posts….

Anyway, that’s how things would probably work out in “the real world”…. Is that how things are going work out this season at The Office?