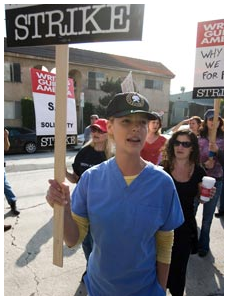 Variety is reporting that a study shows that public is siding with the writers during the writer’s strike.

Part of that is that it’s the beginning of the strike, and nothing except the late night shows (and fake news programs) have been hit by it. Those shows are in reruns, and pretty soon, all those shiny new shows the public has been watching since late August will start drying up. What will the public’s reaction been after a couple of months of “no more new episodes”?

I hope the public sticks with the writers throughout the whole strike. If you look at the small amount of money they’re asking for per DVD (they want 8 cents per DVD, up from their current share which is 4 cents), and they want to be paid for streaming video shown over the Internet. (There are more similar demands, but I won’t get into that here).

Writers got rotten deal back in the days when VHS and cable were new. Hollywood has a bad record of how it treats writers period. Sure, the writer gets paid, but once that script is written, particularly for movies, that’s it. The writer is out of the loop and the bottom of the food chain. Directors and actors come in, change things around, and get all the credit when the movie comes out and it’s a big hit. The writer might get some credit, but usually the original script has very little to do with what ends up getting shot. The writer rarely gets credit for the movie.

Think about that a minute. Think of the last couple of movies you enjoyed. Do you know who wrote them?

In television, I imagine it’s similar, although you can see that some writers (on “LOST” for example) do have a greater influence on what happens on the show. Lost is a special case, since there’s a lot going on that even the actors don’t know about.

Anyway, I’ve never liked the way Hollywood has treated writers. Without the writers, there would be no stories to tell, and it’s time that the studio execs face up to the fact that writers need to be treated a lot better than they are.