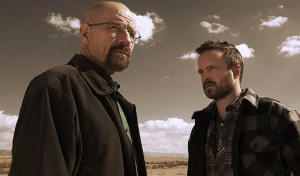 Spoilers from last season ahead

The only way I think Walter can get out of this would be to frame himself. He would declare his innocence and act surprised that no one believed him, and then turn around and frame Lydia and the Czech cartel.

First step? Plant the book for Hank to find so the whole thing could start rolling. Why do I think that? Two reasons: First, we’ve seen him go through elaborate measures to manipulate people. Think the flower poisoning with that kid and giving Jesse an alibi. Second, with as careful as Walt has been all this time, would he really leave Gale’s book in his bathroom? No way. I just don’t see it.

I have a suspicion that he’ll end up having to fake his own death by the end though. The people he’s dealing with aren’t just going to stop if they find out who he is. It would be only good way to save his family. After the faked death, all the “evidence” would point to Walt being “innocent” the whole time.

I’d like to think the show will end with Walt having outsmarted them all, saving his family which is what he wanted to do in the first place.

Can’t wait for the last eight episodes to start!