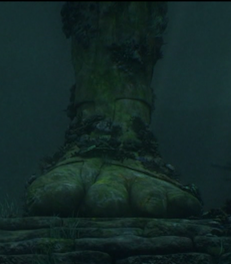 I’ve gone back and forth about how LOST is going to end, and what the whole meaning of the “sideways” timelines are, and how everything might resolve in those timelines.

The two timelines co-exist. The “sideways” timeline, is the result of what happened when the bomb exploded. Everything on the island went underwater. At the same time, and a few years later, the 815ers we’ve come to know are running around.

Remember how Ms. Hawking once said that time has a way of course correcting? We’re in the middle of the mother of all course corrections. Think about this: If people in one time line are dead, and alive in another… why not the island? In other words, it’s possible that since two islands couldn’t exist at the same time any more than two people could exist at the same time, one of the islands had to go. The island that we’re seeing with the 815ers will continue. In other words, it’s not going to sink any time soon just because the other one did.

This leads to an interesting (well, at least I think so) hypothesis: Since two people probably can’t exist in the world at the same time without the timeline course correcting itself, we’re going to see each of the people that haven’t died yet…well, die. That would likely mean that “bad luck” Hurley would die. Sawyer, who at this point appears to be the one that’s going to save the island from Smoke Monster Locke, will likely survive. Feral Claire will likely die too. It’s also possible that the people that died in the old timeline will be back, and will continue to live: Charlie, Shannon, Boone, etc.

At some point the people that survived will become aware of this whole situation, probably through memories in much the same way that Desmond became aware of two time periods.

I don’t have much more about this for right now, but I thought I’d float that out there. What do you think?

One thought on “LOST Theories: Duplicates”