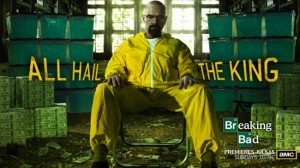 Spoilers ahead
Ha! So, it looks like my prediction about what Walt’s up to is wrong. He didn’t plant the book. He might be able to convince everyone else of his innocence, but not with Hank. The last line of the episode, when Walt said “Tread lightly”… Ha! I don’t think Hank ever expected that. It’ll be interesting to see where things go from here, because you can be sure that Walter isn’t going to sit back and watch things happen.

So, what’s next? Jesse is going a little crazy right now, and it sure looks like he’s not being careful at all – enough so that he will likely be caught by the police, or robbed by people who realize he has a lot of money. In fact, they’ll probably try and rob him after he gives it all away, and he’ll have the hell knocked out of him.

…but who knows. The thing I love about this show is that every time I think I know where they’re going with a plot line, I’m surprised. It’s fun to speculate, but even more fun to be surprised.