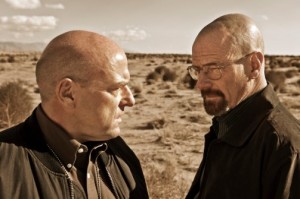 Talk about an episode building to an ending! Wow!

Well, things look pretty grim for Hank and Agent Gomez. I very seriously doubt that they make it out of there alive. Nice touch with having Hank call Marie. I think Walt is going to save Jesse at the very end of that fire fight.

Now comes Walt’s real problem: It won’t take long for Todd’s Uncle Jack to realize that he’s got the upper hand with Walt. Walt is definitely going to have to do a “cook” for Jack, and I’d wager that Jack will try and make sure Walt has to keep cooking after the first batch. Walt’s going to have to take his family and go into hiding, and FAST. Once that’s done, he’s going to go back and make sure that Jack doesn’t bother them ever again.

As soon as Marie realizes that Hank isn’t coming back, she’ll go to the DEA, and that’ll get Walt’s quarantined. I think Walt will have the family away long before that. He better call Saul’s vacuum guy.

So, one question: Walt was carrying his daughter when he walked into the car wash. Where did his daughter go? She’s not still in the back of Walt’s car, is she?