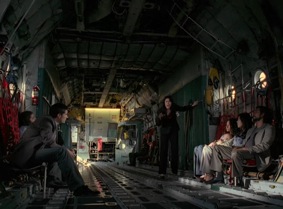 The scene opens with Jack, Kate, Aaron, Sayid, Hurley and Sun on a Coast Guard plane which is about to land in Hawaii. The Oceanic rep, Karen Decker, tells them they’ve been named “The Oceanic 6”. Hurley is greeted by his parents, Sun is greeted by her parents, Jack’s mom is there. Hurley introduces Sayid to his parents, and Kate stands alone with Aaron.

On the island, the 815ers discuss why the helicopter didn’t land, and just dropped a duffel bag with a phone instead. Jack asks Daniel to call the phone, which is on speaker only, and their hear the mercenaries talking about heading to The Orchid. Jack decides to head after them. Juliet tries to convince him to stay, because she’s worried about his recent surgery.

Daniel is very worried about the mercenaries heading for The Orchid because he realizes they’re executing a secondary protocol, and tells Charlotte they need to get off the island. 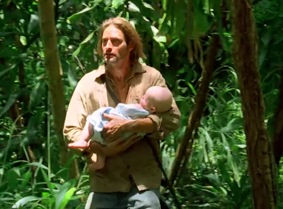 Jack and Kate head off into the jungle, and Kate notices that Jack’s bleeding. Jack tries to tell her it’s ok, but she doesn’t buy it. They hear noises in the jungle, pull their guns and Miles comes out, surprised to see them. Sawyer comes out, holding Aaron. Kate asks what happens to Claire, and Sawyer tell them that she walked off in the middle of the night. Sawyer tells them that he hopes it isn’t Sayid that threw the phone out of the copter, because the mercenaries just blew up most of The Others camp. Jack decides to go on, and Kate tells him he can’t go alone. He tells Kate to take care of Aaron and head to the beach. Jack leaves, and Sawyer follows him, saying “You don’t get to die alone”.

At the press conference, Karen Decker explains where the Ocean 6 were found. She tells of how they crashed off the cost of Membata, and were able to get an Indonesian fishing boat to get them to an island called Sumba at a village called Mankangga. They were then transfered to Hawaii by the Coast Guard.

Questions from the press come next. Jack lies and says how they escaped from the plane, and survived on the water until the current took them close to an island. [In the 5/29 episode, the reporter asks what happened to the others. Jack says that Boone died of his internal injuries, Libby didn’t make it through the first week, and Charlie drowned a few weeks before they left]. Someone asks about them looking well-fed, and Hurley asks if that question was directed at him. [That question was not asked on the 5/29 episode]. She then follows up and asks about Hurley’s money. Hurley says he doesn’t want it because it’s cursed. A Korean reporter asks Sun what happened to her husband, Jin, and whether he died on the island. After hesitating, Sun lies and says that he never made it off the plane. [In the 5/29 episode, a reporter asks Sayid whether he has plans to return to Iraq. Sayid says he has nothing there for him. The reporter follows up with Jack, asking what his plans are when he returns home. Jack replies that he hadn’t thought much about it. His father died in Sydney, and that he’d like to put him to rest]. A reporter asks Kate about giving birth to Aaron on the island, which says says was scary. He then tries to follow up with a question about her being pregnant when she was captured by US Marshalls. Decker cuts off this line of questioning. A reporter asks Sayid if he thinks there will be any other survivors found, and he says, “No, Absolutely not”.

Afterwards, Decker approaches Sayid and tells him that a woman is there to see him. He walks about of the airplane hanger were the press conference was being held, and finds Nayid waiting for him. They embrace.

Back at the island, Sayid lands to boat and asks for help. Sayid says he needs to start taking people back, because the mercenaries are going to kill everyone on the island. 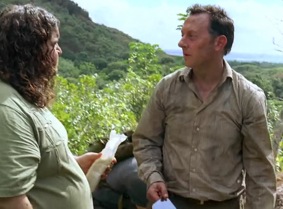 Hurley, Locke and Ben head to The Orchid. Ben says they’re going to move the island. Hurley asks why they didn’t move it before, and Ben says it’s dangerous and unpredictable – a measure of last resort. They stop when Ben finds a cache of supplies. Ben admonishes Hurley for eating 15 year old crackers. He uses a mirror to signal someone at the top of a ridge, but doesn’t tell Hurley and Locke what message he sent.

At the beach, Daniel tells Sayid that he’ll start taking people to the boat. Juliet tells Sun she needs to get on the boat since she’s pregnant. Kate makes it to the beach, and tells Sayid she can help him track Jack. Kate gives Aaron to Sun, and leaves with Sayid. Daniel takes Sun, Aaron and Jin with him in the raft, and they head for the boat.

Flash forward to Sun walking up to the top floor to meet her father at his desk in the Paik building. Paik is handling some sort of money problem as Sun walks in. Sun asks about this, and Mr. Paik tells her that she wouldn’t understand. He asks about her pregnancy. She tells him that he shouldn’t pretend to be interested, because she knows he hated her husband, Jin. Mr. Paik gets upset, and says that she has to respect him. She steps towards him and says that Oceanic paid her a sizable settlement, big enough that she was able to buy a controlling interest in his company, “So, now you will respect me.” He asks why should would do that, and she responds that he ruined her husbands life, and that was the reason they were on the plane in the first place. She hold her father responsible as one of the two people that caused Jin’s death. She goes on to tell him that she’s going to have a baby, and when she gets back, they’ll discuss how to run the company. 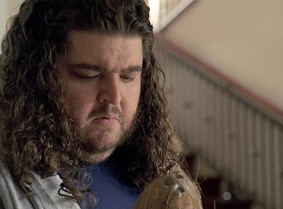 Hurley drives up in an old car, and enters his parents house, which is quite large. He walks in and finds a coconut on the floor. He looks around and starts to hear some whispering. He opens a door to the outside, and it turns out there’s a surprise birthday part for him. Kate is there with Aaron, along with Nadia and Sayid. His father comes over and takes Hurley to see his present.

He takes Hurley to the garage, and it’s the old Z28 they were working on. His father tells him it was like theorpy to be working on it. Hurley gets behind the wheel and sees the 4 8 15 16 23 42 numbers on the odometer. Hurley freaks out and runs away down the street.

In the jungle, Hurley points out to Ben that if they are able to move the island that the mercenaries would go with them, and that could be a problem. Ben says “I’m working on that”. The arrive at The Orchid. Ben tells them to be careful, because Widmore knows about The Orchid, and knows that’s where they will be headed. They realize that the mercenaries beat them to the station.

The scene switches to the rubber raft arriving at the boat. Everyone gets on the boat, except Daniel, who heads back to the island for the next group of people. Sun and Jin are shocked to see Michael. Meanwhile, Desmond tells the acting captain in the control room of the boat to try the engine, which starts up. He turns on the depth scope, but it’s fuzzy. There’s some kind of radio interference. Desmond goes to find it, because the captain says he won’t go any closer for fear of the reefs.

Jack and Sawyer keep heading to find the helicopter. Sawyer is surprised to hear about Jack’s operation. They come across the helicopter and find Frank, who’s chained up to the back seat. Frank tells him that Sayid and Desmond are at the boat, and about the mercenaries. Sawyer says that Hurley is with Locke and Ben. 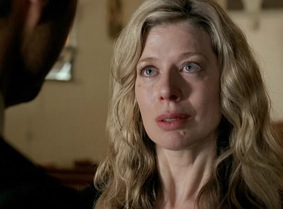 Flash forward to Christian Shepard’s funeral. Jack says a few words, and then it’s over. A blonde woman sees Jack afterwards and tells him his father had a daughter with her. Jack protests that his father didn’t have a daughter. She says that’s it’s very odd, because her daughter was on the same plane ask Jack when it went into the ocean, and that her name was Claire. Jack looks very shaken up about this. Claire’s mom walks to Aaron, tells Kate that he’s beautiful, never realizing that he’s her grandson. 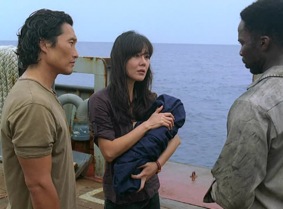 Sun and Jin confront Michael, who explains how he got away. Sun says that Michael is working for Ben, and Michael protests saying he’s trying to make things right. Desmond comes upstairs, yelling for Michael. They all go downstairs to see a room with a lot of explosives.

In the jungle, Kate realizes that the tracks she just found aren’t Jack or Sawyer. Alpert comes out of the jungle and asks them to put their guns down. They don’t, and suddenly The Others are all around them pointing guns at them.

At The Orchid, Ben gives Locke instructions on how to get into the “real” Orchid station which is below ground. Ben says that he’s going to take care of the mercenaries. Ben walks to the station.

Many cut scenes now. Sun going back on deck with Aaron, Jack and Saywer headed after Hurley, Kate and Sayid with The Others.

Hurley and Locke watch as Ben makes his way to the mercenaries. Keamy points a gun at Ben, and then hits him with it.

This site uses Akismet to reduce spam. Learn how your comment data is processed.