I’ve subscribed to Netflix for a number of years. It’s been great getting DVDs delivered right to the house. I’m one of those subscribers that Netflix made some money on, since I kept those DVDs much too long. I know, I know, I shouldn’t have done that, it defeats the purpose…. yeah, yeah yeah. I liked the service. I liked getting the DVDs right to the house. Very easy.

We use the streaming portion of the Netflix subscription all the time. From the Roku, computer, phone… we use it all the time. It’s great.

The subscription hike that Netflix announced to subscribers in July changed that. The plan went from $9.99 for unlimited streaming and unlimited DVDs to $15.98 for the same thing starting today. At $2 a month, forgetting to drop the discs in the mail… well, I can live with that. But bump that up another $6, and that Redbox around the corner starts to look good for first run movies.

So I made the switch.

The big downside to all this is the old catalog of movies Netflix has, but that aren’t on streaming, all go away for us, at least on Netflix.

I’m not sure I’d do that, simply because the Netflix streaming library is a lot bigger. At least it has more things that I like to watch. But it has to get a lot bigger, and it has to start to have first run movies if they’re going to keep their subscriber base.

But what about the old movies? The kids have been wanting to watching the original Planet of the Apes, but since Netflix had a huge wait for that movie (since a new Ape movie came out this summer), we missed out on that. Amazon to the rescue on that one. I can rent it for $2.99 for a night… still cheaper than continuing that Netflix subscription.

I don’t like it, but I “get” why Netflix is doing this. They want to transition people from DVDs to straight streaming, because the longer they wait to do it, the harder it will be for them to make that transition. I just think they’re doing this much to soon.

So, Redbox, you’re getting my business. I like being able to rent DVDs in one town, give it to the family riding along in the back, and letting them watch on the way back home. I like being able to drop those off in my home town. I like that I can rent movies for $1 a night, reserve them on my phone ahead of time and just pick them up. And for the $7 a month I’ll be saving by not going to the higher priced Netflix subscription, in the long run I’ll save month. No more discs sitting around for 2 months without being returned.

Yup, that’s what it took for me to stop being lazy. Jack up the prices.

Netflix… it was fun getting those discs while it lasted.

One more thing: If you’ve never seen Planet of the Apes, don’t look at the DVD cover for the movie. Some absolute moron put the big “surprise” of the movie right on the cover. What an idiot.

Stargate SG-1 is on sale at Amazon today.

Amazon is running a DVD sale on over 1000 DVD and Blu-Ray discs, including Fitness DVDS, indie movies, and TV Shows. If you’re stuck inside waiting for the cold to pass, this is a great way to catch up on some shows you’ve been meaning to see!

As this is an entertainment blog, and not just one about TV (or just “24” or “LOST”), I thought I’d mention that Amazon’s Kindle 2

was released today, If you pre-ordered it, it’ll show up in the next day or two.

What’s a Kindle, and why would you want one? It’s an electronic book reader, but it’s quite a bit more than that. The device has a built-in cell radio that let’s you download content no matter where you are. The key things about that feature are 1) You don’t have to pay monthly fees, so once you buy it, that’s it; 2) You can download new books, sometimes at a substantial discount from Amazon and have them go straight to your Kindle; 3) You can download more than just books – magazines, blogs and newspapers are also available!

If you’re interested, take a look at the Kindle Video

to find out more.

electronic book today. This is a pretty amazing little device. Check out the link including a Kindle 2 Video 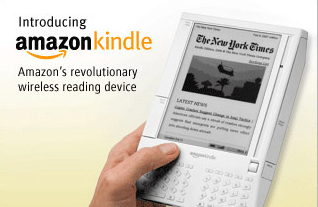 Amazon.com has released the Kindle

just in time for the holidays. The device has a battery life that lasts for days, gets wireless EVDO delivery of content, and has a crisp black and white screen… all this in a device that weights 10.3 ounces.

You can read blogs on it, get newspaper and blog content delivered to it, it has a keyboard. It’ll even fully recharge in 2 hours.

The key thing about the device I think is that there are no wireless bills, service plans or commitments. If they had charged a monthly fee, I think that would have killed the device.

Now, if you want to get your own personal files or pictures on the device, you can e-mail them for $0.10. I’m not sure why there would be a charge for that, but not the other online content.

page for a lot of info and video.

What do you think? Would you buy one?

Update Looks like you’ll be changed $1.99 per blog per month.