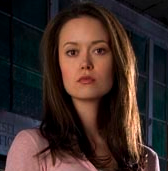 “The Sarah Connor Chronicles” premiered on FOX tonight. I’m not going to go into what happened in detail, but I’ll tell you what I thought of it.

I liked the fact that the “good” Terminator was that young girl, Cameron. (Even if it was obvious from the way she was introduced at school… Even John pointed that out during the show… nice touch, that). The “bad” terminator carrying the gun in his leg was a bit over the top. He could have just as easily just hidden the gun in his belt. I thought it was pretty funny that the quick scan of the SWAT team outside the bank registered as no threat. Tearing up the vault was good too.

The show was entertaining, but it’s kind of hard to tell how they’re going to make this a show last long term. The objectives of the characters on the show are: 1) Keep John Conner alive, 2) Try and destroy Skynet. The problem is, if John dies, the show’s over, and if they destroy Skynet, the show’s over.

And if I hear “The most anticipated show of the year” one more time… Come on! It’s the year’s two weeks old!

There are a lot of ways this show could go wrong: bad Terminator of the week; the FBI agent that, despite all evidence otherwise, STILL doesn’t believe the robots are real; the moment when Cameron goes from a “good terminator” to a “bad terminator” – and then back again; a trip to the future when terminators are everywhere to get something that they can use in the past… Well, you get the idea. If we see anything like that, the show’s doomed.

I’ll keep watching, at least for a while, but I hope it’ll get more interesting – otherwise it’s Hasta La Vista (sorry, couldn’t help myself).

What did you think? Does the show have a chance?

One thought on “The Sarah Connor Chronicles – Premiere”