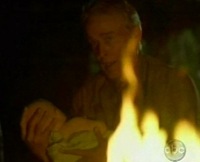 I think we have some evidence that Jack’s Dad be one of The Others. Take a look at the picture in this post. Christian is dressed in the same clothes as The Others were dressed in, when they first appeared to Ben Linus.

Does that mean Christian was always one of The Others? Probably not. I do think that it helps explain why Richard Alpert didn’t seem to age at all between the time we saw him when Ben was young until now. He might very well be “dead” too. I use that term pretty loosely, because for a bunch of dead people Christian/Charlie/Yemi sure do get around.
Technorati Tags: lost, lost theories

3 thoughts on “LOST: Jack’s Dad Is One Of The Others”