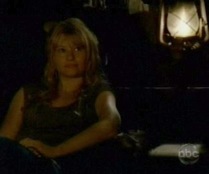 Again we saw no “previously on Lost” in the opener. They’re trying to get as much show in as they can.

Richard Alpert showed up again, and looked pretty upset when young Locke picked the knife off the table. Oh, and by the way, he looks exactly the same as he did when Ben saw him. They made a play for Locke twice, and the kicker was that Matthew Abaddon planted the seed that sent Locke on that Walkabout, and ultimately onto flight 815. Question is, were Alpert and Abaddon on the same side or not? Up until now it didn’t appear so. You have to ask, if Apert and Abaddon are working together, why was Abaddon manipulating Naomi? If they aren’t working together, why would Abaddon want Locke on the island? Is there a faction split, even in The Others camp?

I also think that was the first glimpse of evidence that the 815ers were manipulated to get them on that plane.

Claire appearing the cabin adds another to the ranks of The Others, and extra points to everyone who thought Claire really did die last week in the explosion. Miles was acting pretty strangely around Claire last week, and that was the tip-off.

Did you catch Keamy’s notebook? There was a Dharma logo in that book. That could mean that Widmore had someone on the island working for him, at least in the old days; why else would they be keeping track of where Ben would be heading in a crisis?

So, could it mean that Dharma, at least in some form, still exists? Probably not. But what about the food drops on the island, you might ask? I don’t think that’s evidence of anything. We know that the island timeline is really screwy (see above about the doctor), so it could be the food drop we witnessed way back when was out of the timeline. It was meant to be dropped back when the Dharma people were on the island, and it didn’t get there until much later.

The last line of the show “He wants us to move the island”… Certainly didn’t see that one coming. But, it does give a good explanation for the Black Rock, doesn’t it? If the island moved when the Black Rock was sailing, the sudden appearance of an island could have put the ship right in middle of the jungle.

(PS. Thanks for homeybeef for pointing out we only have three hours left this season, not four, and to Memphish for correcting the times they’re airing).