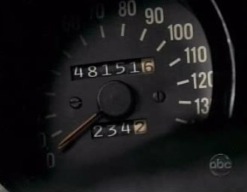 This is it folks! Part 1 of the 2 part finale of LOST: No Place Like Home. You should have seen it by now, and if you haven’t… well, quit reading!

1) It was getting obvious, but we know for sure that a significant amount of time has transpired between the Oceanic 6 getting rescued and the season 3 finale. All those theories about why Aaron was so much bigger are out the door.

More significantly, Charlie and Christian didn’t show up to Hurley and Jack until well after the rescue. There wasn’t an immediate “You have to come back” message. The numbers showed up for Hurley, but that wasn’t much of a message. I have to wonder if they’re trying to get the Oceanic 6 to return because, as everyone probably already suspects, things back on the island didn’t go that well after they left.

Why wait that length of time? No telling, but I suspect that the “course corrections” in time DO take time. Your and my idea of what is a long time is a lot different in the grand scheme of things. Take Ben and Locke. If Locke was supposed to be on the island from childhood, and the island needed to get someone else there (Ben)… It took a pretty darn long time to arrange things to get Locke on that island.

Getting Charlie and Christian to the mainland a year or so after the rescue is probably the island’s idea of “quick”.

2) Notice how Daniel knew about the secondary plan AND had the logo of The Orchid station in his notebook? He’s been through this before, or at least witnessed something because he sure was in a hurry to get people off that island. I’m betting he doesn’t make it off the island before the move.

Great spiral design on that Orchid logo too.

3) Great “shout out” to the producers when Sawyer called The Other’s place “New Otherton”. The producers call it that on their podcast.

4) I liked that “Day 108” was mentioned in Karen Decker’s speech before the Ocean 6 press conference.

5) They’re really leading us to believe that Jin is dead. I sure hope he’s not.

6) Sun’s scene with her father was probably one of the very best of the whole season. If her father is involved in anyway with Widmore, she’ll find out. And if he’s not involved, Sun now has a LOT of resources at her command to help people get back to the island when the time comes. You KNOW that if Jin’s alive, she’ll be headed back.

7) Hurley’s chowing down on 15 year old crackers. My first thought was “Uuugh”. My second thought was: How did Ben know those were 15 years old? Did they do another island shift 15 years ago? Wasn’t The Purge about 12 years ago?

8) Hurley’s numbers are back. When I saw those, I thought: I wonder if those numbers are going to be significant in getting the island moved? Are they the combination or formula that has to be used?

9) The thing broadcasting on the boat is either a homing beacon Widmore had planted, or the transmission Michael’s been using with Ben.

10) The look on Jack’s face when he found out about Claire… Wow, what a way to find that out. And Claire’s mom had no idea that Aaron is her grandson. Jack still doesn’t know that something weird has happened to Claire.

11) After the scenes from the season 4 finale preview went black, we could hear Locke yelling “What did you do?” Sounds like things didn’t go according to plan.

What did you think of last night’s show?

One thought on “LOST: No Place Like Home Part 1”