The company promoting a series that Sprint and Heroes have put together dropped me a line to let me know about a new web series, “Heroes” Destiny”.

Watch Heroes – One of Us, One of Them

A couple of things about this week’s Heroes.

First, extra mega-creepy points for Syler’s “feeding” at the beginning. From Syler and Peter’s Mom. Yikes.

Second, it was (thankfully) a lot less frantic then last week’s episodes.

Third, I don’t like the way they threw Syler into partnership with Noah without really showing Syler’s motive for going along with the whole thing. Noah’s motivation, (kill Syler when he can) is clear, but Syler just going along for the ride seemingly willingly? We KNOW he’s up to something.

Fourth, what, NOTHING about Mohinder this week? Ok, narration, I’ll give you that… but come on. The Tracy/Nikki/”It-Appears-She-Might-Have-Been-Constructed” story line could have waited.

This is the third season of Heroes and it was pretty action packed. We got two episodes, back to back! It was…perhaps a bit TOO action packed. I’m not sure if they felt they needed to make up for last year, or what, but there were so many things going on it was nearly a jumbled mess. Nearly… but not totally.

We saw that Nathan’s shooter was Peter, and that Nathan didn’t die at the end of last season. (Turns out there was more of that going around… more on that later). He ended up in the hospital, where he died. But then, TA DA! He wasn’t dead… again. This time he stayed not dead.

The other dead person that came back was Linderman! Quite a surprise that one; something I didn’t see coming at all. Neither did anyone else, since Nathan’s the only one that can see him. We know this because 1) Nikki/Tracy didn’t go ballistic and kill Linderman on the spot and 2) Linderman told Nathan that. Pretty big clue on #1 though, so #2 wasn’t a big surprise.

Syler ended up at Claire’s house, looking to pick Claire’s brain about her powers, and he did just that. This is another one of those shows where a giant “WARNING! BRAINS ABOUT TO BE SHOWN!” would have been helpful. I can only attribute the lack of this warning to possibly getting a paper towel company to sponsor the show, because there was probably a bit of barf people had to clean up when they showed the scene where Syler went into Claire’s brain.

Ando and Hiro were great, as usual. I’d like to see a show with just those guys in it. They met a fast woman…. I know what you’re thinking, this is a family blog, but yeah, she’s super fast. She stole the formula that Hiro’s father made Hiro promise to guard. (Nice touch with the “I thought I told you not to open the safe”).

Parkman went on safari out to Africa, not really by choice, but through “Peter from the Future” when Parkman figured out something wasn’t quite right with the whole Nathan shooting.

Peter ended up in – a Level 5 prisoner’s body? Yeah, OK… We can go with that. HOW that happened, well, “Peter from the Future” must have learned it somehow.

The biggest surprise was that Peter, Nathan and Syler…. brothers. Yeah, that’s what Peter’s mom said.

Other things happened, including some obvious product placement, finding out too late that Bob’s special ability was pretty cool, and that Maya really has to get on the bandwagon if she wants to stop bad things from happening.

PLUS they let out all the bad guys on level 5. Peter’s going to be hanging with them for a while.

As for Mohinder… Poor Mohinder. He’s turning into Spiderman.

And, this season something new! Ha! Kidding. They’re saving the world… AGAIN! (Anyone else catch “Save ourselves, save the world?”)

This is an interesting show, that’s for sure. Where else can you see the Greatest American Hero show up for a guest spot as a popsicle, right? I’m just afraid that in their zeal to make this more action packed, things have gone a little bit TOO action packed. WAY too many things going on.

Let’s hope things settle down a bit so we can get into some storylines that make all this fit together nicely.

Oh, and a nice “WARNING! GROSS STUFF ABOUT TO HAPPEN” would be nice too.

Dancing with the Stars (ABC)
The Big Bang Theory (CBS)

How I Met Your Mother (CBS)

I’m planning on catching The Big Bang Theory, How I Met Your Mother, and Heroes, either by watching “live” or via the DVR. Still haven’t given up on “Terminator: The Sarah Connor Chronicles”, so I’ll be recording that too. 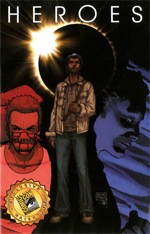 Sprint is running the “Create Your Own Hero” promotion for NBC’s “Heroes”, which will determine which Hero will appear in a live-action online series.

You can chose between Santiago, who has the abilities of moving quickly, and doing quick analysis of probabilities, and Audrey, who has the ability change other people’s speed. Check out the full descriptions on the Hero’s website.

After reading the descriptions, I picked Audrey. I think there’s some good potential in that kind of character.

Which Hero did you pick?

(Full disclosure: I was informed about this via M80 who’s contacted me on behalf of Sprint)

Hulu, the website set upto broadcast shows over the web, is finally exiting it’s beta phase, and will be opening to the public on March 12. You’ll be able to watch shows like Heroes, The Office, The Simpsons, as well as many classic TV shows.

As you probably know, with the writer’s strike going, most fictional shows are on hold. Reality shows are still rolling along. Anyway, some shows have done “wrap ups” before going back into reruns, and one of those is Heroes. The show’s season, which they call volume 2, was cut short and ended last night.

It was a decent episode, but a little anti-climatic in places and surprising in others. The buzz before the show was that two characters were going to die. It appeared that one of those was going to be Maya, and it looked like the whole Maya/Alejandro storyline was going to end in a very “Nikki/Paolo we were just kidding about introducing these characters” sort of way (you LOST fans will know what I’m talking about).

That wasn’t to be, since Mohinder injected her with Claire’s blood. (Side note: I like the name “Mohinder”. Not sure why. It’s just fun to say. Mohinder. MohinderMohinderMohinder…. ahem…) So, we’ll be seeing more of Crying Maya.

Big trouble brewing for Claire now that Sylar knows her blood heals. Noah has a nice big target on him now too, since it looks like he was the one that killed Nathan. Sylar found out that someone injected him with something that caused him to lose his powers, and he didn’t like it one bit.

It looks like Peter’s mom, Angela, is still part of “The Business” and is working with Bob. For a guy that runs something like that, he doesn’t have a lot of staff. You’d figure that a mastermind running an organization like that would have more people around. Other than his daughter. If Angela is working with “The Business”, that could explain how she was able to survive in that alternate future where 90% of the world was dead.

Nice touch with the Popeye reference at the beginning of Volume 3 when Sylar got his powers back and tested them by willing a spinach can into his hand.

Sorry to see Nathan bite the dust, but Nikki’s character was just weird… never did like her whole storyline. Her “secret power” is that she’s got a split personality and can really kick people’s butts? Maybe it’s that she had this power and her mind couldn’t handle it, so it manifested that other personality. Whatever. It was pretty annoying.

Adam will be back, and he’s going to be really ticked off when he finally shows up. If I were Hiro, I would have put him about 300 years in the past (or better yet, the future), and left him in the same Japanese cemetary. Maybe under a nuclear reactor. Or a garbage dump. Definitely not an Indian burial ground though, bad things happen when you mess around with those.

You have to give Tim Kring credit. In an article in Entertainment Weekly, he lists five mistakes they made in the beginning of Heroes season 2, and gives explanations for why he thought they were mistakes. You can follow the story link to see what he said about each of these, but here’s what I think:

– Not only was it too slow, it just dropped us into the story well after the events of season 1. I understand that was to introduce the character Adam in context, but there probably was a better way to do it.
Is every season going to have “world-saving stakes”? OK, technically, it was just to save a bomb from going off last season, but the deserted street thing was done last season… we want something new.
Specifically, he feels that Maya and Alejandro weren’t introduced properly. I disagree. They might have felt “disconnected” from the storyline as Kring says, but I don’t really think they are. Sylar was out in a remote area, is making his way back, and runs into these two people with powers. I thought it worked.
Boy, and how. I was beginning to think that Hiro was going to take over for Kensei and live out his life there, or maybe even bring back Yaeko with him. This, I think more than anything, made the beginning of the season seem like it dragged on.
– Agree on the Claire/West “love connection”, but disagree about Hiro/Yaeko. I think the Hiro/Yaeko thing worked, but West just seemed like a stalker.

Read the full article at EW.com

I thought that Noah was dead for sure, and was surprised that he came back at the end.

I do have a few questions:

How long is it going to take for Noah to get out of that holding facility?

Did Bob get Claire’s blood because he knew he would need it for Noah later? Is Bob really the bad guy here?

Is the plague that takes everyone down caused by Sylar and Maya? Is Adam really working to stop that coming plague, or is he really just going after “The Company” and the last generation of Heroes?