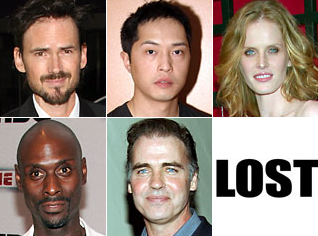 EW.com comes through again with a short interview with Damon Lindelof and Carlton Cuse in which they discuss the five new actors joining LOST next season.

The producers talk about how they went about casting the new characters for the show, while not giving too much away while they were trying to find them. They don’t reveal who is going to be doing what on the show, but with character types such as “ruthless corporate recruiter”, let the speculation begin!

The interview was pretty surprising; I had no idea that Jeff Fahey at set up an orphanage in Afghanistan.

…and is it just me, or does Rebecca Mader look REALLY spooky in that picture?

UGO has an interview with Joley Wood, author of Living Lost: Why We’re All Stuck on the Island

Watch with Kristin at EOnline has an interview with Damon Lindelof, which was done after the Season Finale of Lost.

TV Guide has a nice interview with Carlton Cuse and Damon Lindelof one of the significant deaths in the Lost Finale.

Entertainment Weekly has a brief interview with Carlton Cuse and Damon Lindelof about the decision to end LOST after three more season.

They also talk about the rest of this season, and even specifically say we’re going to start getting some answers.

“And more importantly, we meet Jacob — the elusive, unseen, presumed
leader of the Others — for the first time. And this is a character who
is every bit as significant to our universe as the Emperor was to the Star Wars universe — a character that you didn’t get to meet until Return of the Jedi
but was referred to all through the preceding films. Jacob is a guy who
is going to have a very significant, ongoing sort of story value in our
show.”

There’s a great article on Locke and his role on ‘Lost’ in the LA Times.

USA TODAY has an article on what it’s like for the LOST actors not working together as much this season, personal issues and what it’s like working on the show.

The Sydney Morning Herald has an article on where LOST is headed in the next few years.

The stars of the show are just as interested as everyone else to see where things are headed, and
the producers have stated that there are a few more years left until the island mystery is solved, and then that will be it for the show.

They’re not going to try and drag it out forever, which is a good thing.

There’s a short (part 1) of a new interview on mediaVillage with executive producers Damon Lindelof and Carlton Cuse, where they discuss television critics, and hint about what’s in store for the rest of season 3.

Part 2 of the interview is here.

The Honolulu Star-Bulletin has a great article on Michael Emerson, the actor that plays Henry Gale/Benjamin Linus on Lost. It talks about his background in theater, what the differences are between being an actor on TV and an actor on stage, and how he approaches acting roles.

He also reveals a few hints about what’s coming next in Lost: