Spoilers ahead – Don’t read if you haven’t seen Across The Sea!

The episode “What They Died For” airs in a couple of hours.

There’s a theory going around that Mother, the woman that raised Jacob and The Man in Black, was actually a smoke monster herself. The main reason given is the destruction at the base camp where The Man in Black lived with the people he considered “corrupt”.

There are two sides of this. First, the “She wasn’t” argument:

We haven’t seen any outward signs from Jacob that he’s got some awesome power – except for bringing that storm up to bring The Black Rock onto shore. We haven’t actually seen him “turn on that power”. That doesn’t mean he doesn’t have destructive power like that. If he did, Mother could have manifested it herself that way. In other words, not “Smoke Monster Evil”, but deadly none the less.

The “She was” argument:

The only way she could have taken out that many people was if she was a smoke monster herself. Also, her warning to Jacob may have been first hand knowledge of what happens to someone if they go down the Light Well. The body she inhabited may well have just been a physical representation (just like UnLock is), and therefore she really did have a body and a skeleton (which was found during the first season).

There really isn’t much to go on with these arguments other than that. The implications of it are interesting though. 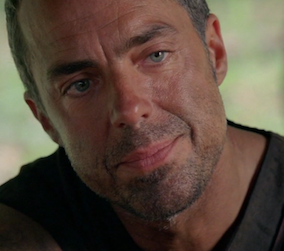 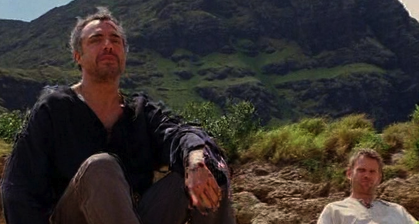 Here’s a picture of the tapestry that Jacob was working on:

The letters are Greek, and are:

I looked around and found a thread on Lostpedia, which states it roughly translates to:

“May the gods grant thee all that thy heart desires.”